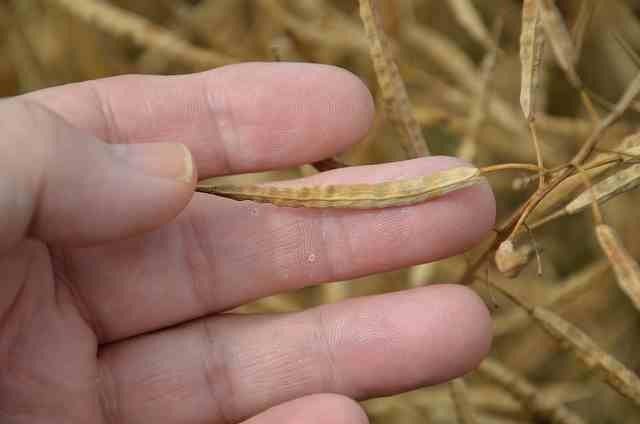 Canola oil is extracted from the canola plant seeds. The canola plant is a cultivar of rapeseed, it was grown in 1970s to have a low amount of erucic acid. Unlike rapeseed it is safe for people.  Sunflower oil is compressed from seeds of sunflower. The oils are almost identical in calories – about 120 kcal in one tablespoon.

According to Wikipedia canola oil is low in saturated fatty acids and high in monounsaturates – however, less than high-oleic sunflower oil (61%). It has omega-3 ALA fatty acid, found rarely in oils but essentially needed for our health. Canola oil has less saturated fat than any of sunflower oils.

IMPORTANT! When is Canola Oil Bad for You?

Canola oil is refined oil and has a smoke point of 400°F. This temperature is considered medium-high and lets use canola oil for baking, stir-frying and deep-frying. Some scientists admit that omega-3 fats in canola oil will break down at such high temperatures but there is no evidence in it yet.

Sunflower oil may be refined or unrefined. Unrefined sunflower oil has more nutrients, phytosterols and phospholipids in its content. It has a low smoke point and can be used for salad dressing and low-heat cooking. Refined sunflower oil of any type begins to smoke only at high temperatures, so it is ideal for frying and oven-cooking.