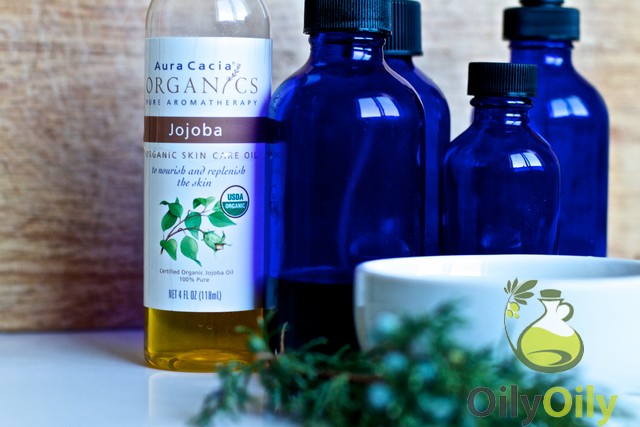 Wikipedia defines rosacea as a skin disease that is characterized by the appearance of red streaks of capillaries on the skin, and by redness and irritation of the skin. Jojoba oil for rosacea treatment is a perfect carrier oil. How can it help?

A treatment of rosacea is complex; it includes modifying the diet and an appropriate cream. Essential oils are also effective against rosacea.

Essential oils for the treatment of rosacea are often mixed with sweet almond oil or jojoba oil.

According to Agricultural Research Service of the U.S. Department of Agriculture, jojoba oil is produced from the seeds of jojoba tree, scientifically known as Simmondsia chinenis, which is growing in the southern part of United States and northern Mexico. Pure jojoba oil has a bright golden color, but refined is always colorless and transparent. This oil has a high expiration date and hardly can be oxidized in comparison with other oils, because it doesn’t contain triglycerides.

It’s interesting that jojoba oil doesn’t look like as usual oil, but has a consistence of a wax ester. This connection is most similar to human sebum. Due to this property, the oil can “spoof” our skin and balance the production of protective lipid layer. Jojoba oil is a perfect moisturizer that can be quickly absorbed into the deepest layers of the skin, thus forming a semi-permeable protective lipid layer that prevents the loss of life-giving water. Getting into the intercellular spaces of the stratum of the skin, jojoba oil softens and expands it inside, making the skin soft and supple.

One of the characteristic features of jojoba oil is its ability to be quickly adsorbed by the skin without clogging pores and follicles. Opened pores and hair follicles can function normally, but the surface of the skin at this time is not greasy and sticky. Jojoba oil benefits for the skin making it soft, smooth and velvety.

SEE ALSO: Get to Know the Benefits of Jojoba Oil for Nails

• Provides hydration throughout the day, as the jojoba oil does not evaporate

• Can balance the production of sebum

• The plant is not processed with pesticides and GMO

• It contains a lot of minerals and vitamin E

So jojoba is used to treat rosacea because of its emollient properties, it does not irritate and helps to keep the skin hydrated, which is especially important for rosacea.

YOU MAY ALSO BE INTERESTED IN: Tea Tree Oil for Nail Fungus

The recipes with jojoba oil to cope with rosacea

Previous: What is Jojoba Oil? Everything about This Luxurious Plant Extract
Next: All Possible Tea Tree Oil Uses
Related Articles